Want 4% Interest on your savings and a warm fuzzy feeling! 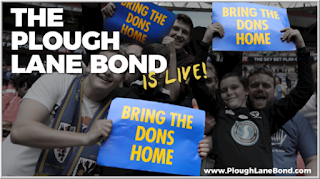 Yes you heard that right. You can get 4% interest on an investment, and not a suspect Nigerian in sight. That's way more than anywhere else. Even government bonds offer less than 2%.

So what's the catch?

The Plough Lane Bond is no ordinary bond. It is a fundraising scheme organised by The Dons Trust, the not for profit body that owns the AFC Wimbledon football club. The club is in the process of building a new stadium back at Plough Lane. The club previously had their ground there until the owners sold it. Now as a club owned by the fans, we've a real chance of returning to our spiritual Merton home. To complete this task, we need money. Around £11 million in total, and the Plough Lane Bond is one way we're raising it.

We could go to a bank, but the interest rates and repayments would be high. By borrowing money from individuals over a set time frame, the club is able to offer an advantageous interest rate, whilst keeping repayments low. In effect, it is a cheap loan.

Head over to https://ploughlanebond.com/ for further information. In summary, the important stuff is:


What are you waiting for?

It's a win-win investment. The club gets the investment it needs with cheaper repayments to build the stadium it wants back in Merton. You get an advantageous return, and a warm feeling of helping the club and it's fans in the process.

If you're interested, you have until 14th February 2020 to invest. The usual disclaimers of seeking independent financial advice applies.
AFC Wimbledon Football Personal