- January 17, 2020
Once upon a time, you had to fly to Saltzberg or Munich to find a Christmas market. These days every town seems to want to have wooden huts selling overpriced gifts and sugary foods. Most are distinctly average at best, but not in Bournemouth.

We visited the town between Christmas and New Year. We’d never been before despite it being no more than 100 miles from our home, but as we were visiting relatives on the south coast we made the effort to pop in on our way back. To be honest I wasn't sure what to expect. A typical English seaside resort maybe? You know groups or lads and lasses on a weekend away, tacky amusement arcades, and fish n' chip shops. Sure Bournemouth has that, but it has a lot more going for it.

We choose to stay outside the centre of Bournemouth. Why? Mainly because most of the hotels in the centre either had average reviews or limited car parking. As we were driving down, the latter was a priority. There is a good range of hotels in the centre, but they appeared a little shabby, and a common theme of their reviews mentioned noise from the nearby bars. The hotels may have been very convenient for the beach, but that was little compensation, especially as the sea doesn't have the same appeal in late December!

Looking a little further afield, we found Boscombe. Situated about two kilometres along the coast to the east of Bournemouth, this quaint suburb was just what we were after. It may not have the glitch and glamour of its larger neighbour, but what it lacks in facilities it gains in poise and civility. If Bournemouth is the brash elder brother, Boscombe is the demur daughter. It even has its own pier, but more on that later. Christchurch Road leads straight into Bournemouth and has a plethora of small to mid sized hotels situated along its length. Most are conversions of Georgian or Victorian houses with loads of character. There are regular buses going into Bournemouth.

As for Boscombe itself, we didn’t really spend much time there. We did walk down to the pier. It isn’t as attractive as others along the south coast, but it is worth a stroll to the end. It isn’t long, no more than 150 metres, and it has more of an industrial appearance. It was destroyed by the British army during World War Two because they feared it could be used as a landing destination for enemy forces. Thank God the army didn’t do the same to other piers along the south coast. Such wanton destruction shouldn't be condoned. Thankfully the town rallied together in the early 1960s and rebuilt the pier, which explains the rather plain appearance. Yes it may not have the same appeal as it’s larger neighbour, but it is still worth a wander to the end.

Interesting fact: the crazy golf course finishes with your ball falling into the sea, but never mind as it is made up of fish food! 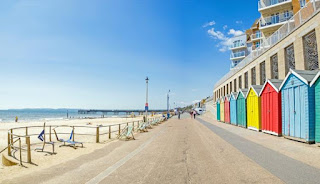 Talking about wandering, the coastline walk from Boscombe to Bournemouth is a must, even on a rather cold and windy December evening. We strolled past the brightly coloured beach huts, savouring the peace and quiet. It’s a popular pastime, with many locals out for their daily constitutional, running or cycling, or walking their dogs. We walked along the beach path on the way in, but you can also walk along the cliff path. We did that the following day in the daylight for a different perspective.

Having walked along the coast into the town, we were ready for a sit down and something to eat. But on entering the town we were taken by the gardens complete with Christmas lights. The sheer quantity, variety, and quality was breathtaking. Throw in the funfair, huts selling gifts, and organised buskers singing, and you had the complete experience. We'd been to Winter Wonderland in London a week or so earlier, but Bournemouth was way better. I take my hat off to Bournemouth City Council for organising it. 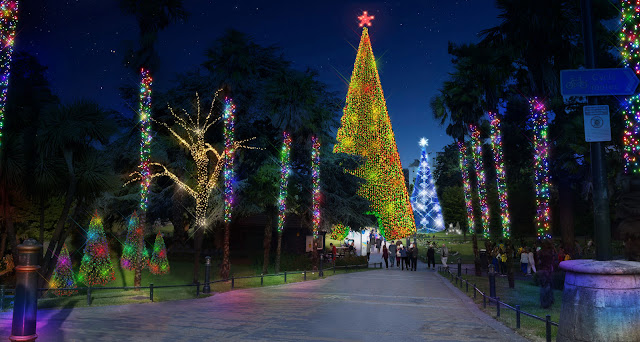 Finally, one aspect of Bournemouth life that surprised us was the Jewish population. Seeing whole families of Orthodox Jews walking the streets made me wonder why they were there. It turns out Bournemouth has one of the largest Jewish communities in the UK, with many arriving in the town in the early part of the 20th century. Our visit coinciding with the feast of Hanukkah may have something to do with the numbers, but still. In the same way we were puzzled by the number of Indians on the Isle of Wight a few years ago, it made me realise just how little I know about UK communities from other lands who've made their homes here. Interesting!