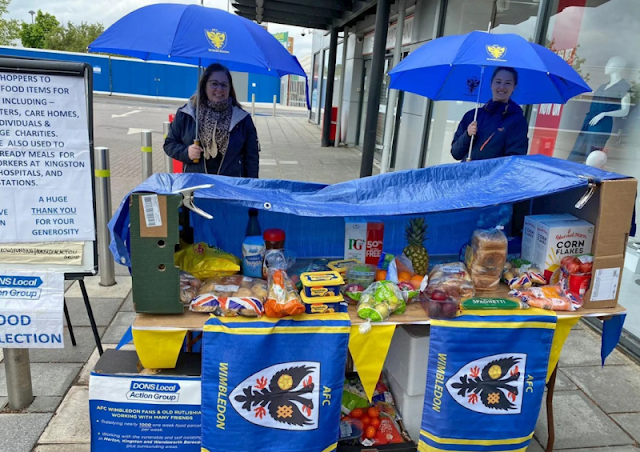 Football fans. They’re just a bunch of loud mouthed yobs! The clubs are just as bad. It’s all money, money, money and winning at all costs.

One place you won’t find any football hooligans is at AFC Wimbledon matches. In fact, you may not even know there is a successful professional football team in Wimbledon. This idyllic corner of south west London is forever associated with a certain annual tennis tournament. Trouble is, sports fans need to get their adrenalin fix for the other 50 weeks of the year.

AFC Wimbledon is a fans owned club, meaning it is run by a trust that is wholly owned and run by the fans. There’s no big businessman or hedge fund, just a dedicated fanbase with the interests of their club at heart. But it wasn’t always that way.

The club currently plays in League One of the English football pyramid, which is rather confusingly two leagues below the Premier League. It has a fairly unique history, in that it had to start again back in 2002 following a deeply divisive decision to move the old Wimbledon FC to Milton Keynes. It may only be sixty miles away, but it may as well be six hundred.

Having started the new club with nothing, not even players or a pitch, the fans owned club achieved their ambition of regaining their league status after just nine years. Yet despite going from nothing to being an established professional club, it has never forgotten where it has come from. A sense of community has been central to everything the club stands for. Without the community, there would be no football in Wimbledon.

There’s no football to watch, so what can we do?

With the arrival of Covid-19 and the suspension of all sporting events, it was only natural for the club’s fans to give something back to those who were suffering through no fault of their own. The result was the Dons Local Action Group. Made up of approximately 600 volunteers, the group started out collecting food donations outside local supermarkets, and distributing food parcels to local residents quarantined at home because of the virus. Well there was no football to watch, so this was a great way to meet fellow fans and do some good.

But like all good ideas, it snowballed. Thanks to linking up with the Old Wimbledonians Football Club who offered use of their kitchen, the group has been able to cook and deliver hot meals. It has even linked up with local schools and the local MP, to provide hardware for children who can’t study from home because of a lack of the right equipment.

With well over 1000 food parcels and 1500 cooked meals delivered to date, the work of the group has been an astounding success. The operation has been expanded into neighbouring areas, and there’s no sign of the demand decreasing. Yet  with no football to watch in the foreseeable future, it has proved to be a very rewarding experience for the fans. They may not be able to meet in the normal way, but doing something positive in the name of the club is all the motivation they need.

The volunteers organising the group and delivering food parcels cover the whole spectrum of the club’s supporter base. Some are students home from university. Others are upstanding members of society, who find themselves furloughed by their company as a result of the pandemic. Others are just fans with the time to be able to put something back into their community.

The skill set of the average volunteer also varies widely. From the muscle involved in moving boxes and crates from vans to the warehouse, to the logistics of managing and sorting items, the group does it all. There’s even a marketing and data project team. In short whether your skill set is doing or managing, a role will be found to match it.

The work of the Dons Local Action Group is far from unique. Food banks and soup kitchens have been around for quite some time, but Dons fans were quick off the ground and among the first sporting organisations to galvanise support. Similar groups have been started by other sporting establishments too.

Yet thanks in no small part to an effective social media campaign, news of the group’s work has reached parts of the world you wouldn’t necessarily expect it to reach. As you’d expect, the group’s success has featured fairly heavily in the local media. After all this is the sort of story local newspapers thrive on. There have been spots on the BBC’s Saturday Kitchen programme, that aims to promote how the food industry is helping others in this time of need.

The biggest impact to date though is the Corriere della Sera newspaper, published in Milan, Italy. Famous for the rivalry between two of Italy’s biggest football clubs, Inter Milan and A C Milan, the newspaper focused on the groups achievements to date, and how it has inspired others to setup similar initiatives. As one of the club’s founders said, "All this makes you understand what can be done when a community is united". It can indeed.
AFC Wimbledon Football Sport