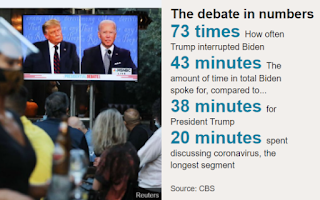 BBC presenter Jeremy Vine's summary of watching the first US Presidential Debate sums up a lot of what is wrong with debates of this type. The gladiatorial nature of such events leads to accusation and counter accusation. Last night's event definitely fitted that description, with both sides ignoring attempts by the moderator to calm down and let the other speak.

It is hardly surprising they were so aggressive. The prize for the winner of the election is a job for the next four years as the leader of one the largest superpowers. It also gives them a chance to make a name for themselves in the history books. The loser by comparison is almost immediately forgotten about.

Listening to the debate was hard work. The constant sniping and interruptions made it hard to concentrate on what was being said. This may have been a deliberate tactic, particularly from Trump who is trying to reverse the opinion polls which suggest he's a goner. But it takes two to have an argument, and Biden didn't try to avoid a confrontation. So was Biden right to stand up to Trump's aggressive accusations?

It is hard for Trump to do anything different from what he's done before. Everyone knows how he operates and what he stands for. He has his support base who'll not change their view of him, but he needs to appeal to other demographics if he's to win a second term. Biden by comparison is on the up and is widely expected to win the election. So by adopting a similar strategy to Trump in this debate, Biden annulled a lot of the bluster aimed at him. The general opinion of the debate was one of negativity. It was never going to be pleasant to watch, and it certainly wasn't. It was downright dirty and at times deeply personal.

So with the media almost exclusively talking about the debate rather than the individuals or policy, the question must be asked if the debate was useful. After all, the main reason for these debates is to allow the electorate who may be undecided on which way to vote, to make up their minds.

The problem is, the very nature of these types of debates rarely meets that objective. In fact more often than not it has the opposite effect. Undecided voters frequently lose interest and zone out leaving them none the wiser. The real winners of the debates are the candidate's own supporters, who tell everyone after the event just how well their candidate did.

Maybe it's time to knock them on the head. Either that or get a moderator who isn't afraid to tell a Presidential candidate to shut the feck up!