Why change is required to footballing authorities

- January 02, 2021
Football fans rarely feel the bodies that run the beautiful game have their interests or that of the clubs at heart. Be it FIFA, the Premier League, or the English Football League (EFL), the feeling is that these bodies seem more interested in securing their longterm existence. The perception seems to be they are more focused on keeping sponsors happy, than on the very people who ensure the games go ahead.
Clubs like AFC Wimbledon know only too well about the injustice that the footballing authorities can heap on clubs and fans. After all it was nearly 20 years ago that the EFL allowed Wimbledon FC to up sticks from London and create a franchised version of the club 70 miles away. To quote the EFL, it was a decision “In the wider interests of football”. In other words it is OK to see a club fans and community to disappear overnight if it ensures the survival of the game itself.
The demands of a global pandemic don’t help, but the underlying feeling is that the priority is in the wrong areas. There’s also a perception of inconsistency in the decisions being made. Take the following as examples: 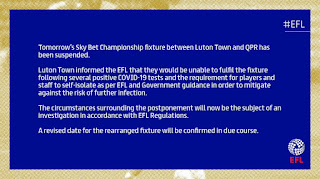 These double standards come during a period where the vast majority of country is enduring a lockdown where we’re told not to make unnecessary journeys, and to work from home wherever possible. We’re only supposed to leave home to buy food or exercise. Admittedly professional sports can’t work from home, but does that make it essential that they go ahead?
The latest decision for a game to go ahead despite both clubs suffering Covid-19 outbreaks, beggars belief. What can anyone benefit from watching two depleted teams playing before no fans. What’s more, why is it acceptable to place players and club staff in danger? The increasing number of clubs suffering outbreaks has seen some managers call for a temporary break in the season. It seems a no brainer, yet the official line is that all games should go ahead as planned.
Just yesterday the Football Association announced that all FA Cup games would have to go ahead, even if a club has had to postpone games. This just cements the opinion that the footballing bodies are more concerned with the financial support given to them by sponsors. Such a (frankly) moronic announcement is totally at odds with the fans. Having thousands of players and staff travelling around the country when we’re all being told to stay at home, gives the impression of double standards.
The problem is that there is no one body representing football. The disjointed administrative bodies each look after their own interests, whilst paying lip service to the very game that ensures they exist. The end result is the disjointed mess, where no one voice is taking responsibility.
Questions are beginning to be asked by clubs. If a club has responsibility for the safety of its employees and is asking for games to be postponed, yet is being overruled by EFl and forced to play, what does a club do? Does it refuse to play and take the inevitable fines and point reductions on the chin?
These unprecedented times require unprecedented actions. We’re all making things up as we go along. We football fans get that, but the way our clubs are being supported by the very bodies that should be looking after their interests is shambolic.
Football Personal Sport